You are here: Home / Expired / “Americans Incarcerated” exhibit at BIMA through June 12
← Best things to buy in March
Kids can Try Hockey Free in the Puget Sound region →

Executive Order 9066, issued by President Franklin Roosevelt on February 19, 1942, authorized the evacuation of all persons deemed a threat to national security from the West Coast. Over 100,000 adults and children of Japanese ancestry were sent to internment camps. A new exhibit opens this week at Bainbridge Island Museum of Art (BIMA) by local artists Jan and Chris Hopkins from Everett, Washington. 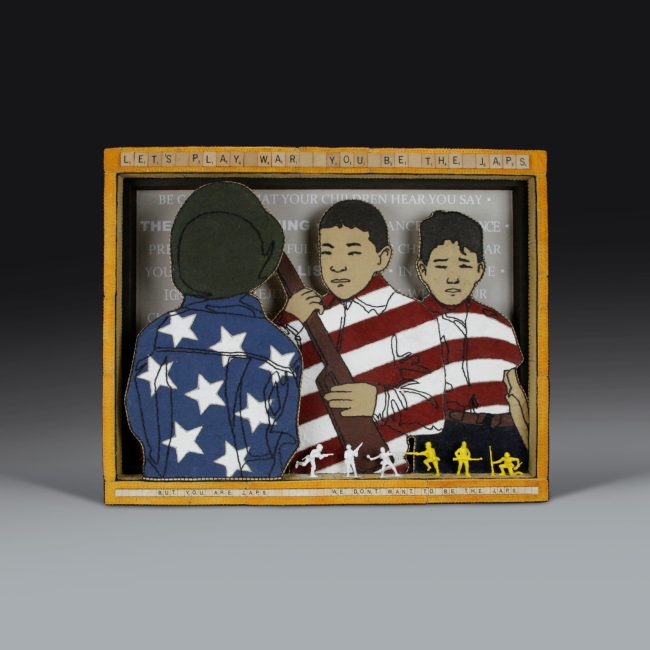 About artists Jan and Chris Hopkins

“Americans Incarcerated: A Family’s Story of Social Injustice” is an evolving collaboration between Jan and Chris to memorialize the eviction of Japanese Americans during World War II. As a child of interned Japanese Americans, Jan grew up with little knowledge of her heritage or what her family endured. Their exhibition is inspired by Jan’s desire to learn more about her cultural identity.

Jan is renowned for her basketry and sculptural fiber art, working with unconventional natural materials. Her husband, Chris has enjoyed a high-profile career in the world of commercial illustration art and now celebrates stories of American perseverance through art.

In 2018, , “Americans Incarcerated: A Family’s Story of Social Injustice” was on display at the Schack Art Center in Everett. The BIMA exhibition coincides with the 80th Anniversary of the Japanese American Exclusion from Bainbridge Island on March 30, 1942, the first such removal of West Coast residents. 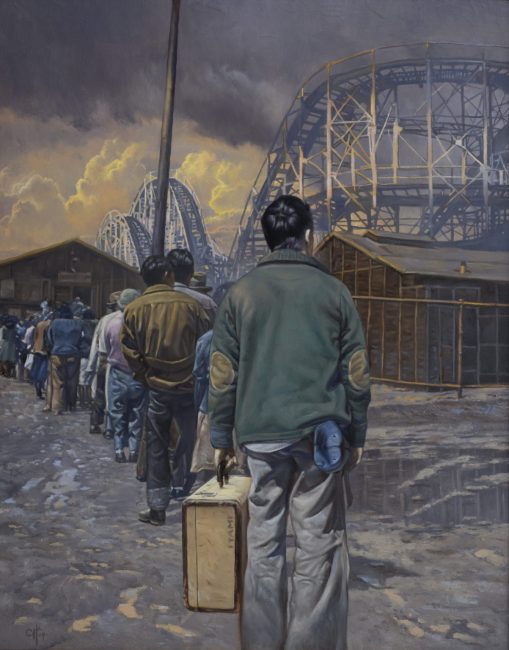 The Hopkinʻs work is engaging, beautiful, and heartbreaking all at once. It portrays the range of fear, racism, alienation, and loss experienced through this fateful chapter in American history. It also honors the resilience and patriotism many chose to embrace. The exhibition offers space to learn more about the Japanese American exclusion during World War II, and to discuss the repercussions and semantics associated with it today.

Located a stone’s throw away from the Bainbridge Island ferry terminal, BIMA is home to a growing art collection with a focus on artists from the Puget Sound region. Since opening its LEED Gold certified building in 2013, the Museum’s galleries, auditorium, Bistro, Store and plaza buzz with a variety of events covering the entire artistic spectrum.

There is always something new and exciting to experience at BIMA. Major exhibitions change three times per year. In addition, the museum offers classes, tours, films, workshops, lectures, concerts, and events. The exhibitions feature recognized masters and emerging artists that planned to inspire you through striking works and thought-provoking themes.

BIMA believes art is for everyone and is committed to provide free general admission to the museum every day. This is made possible thanks to gracious and generous donors and BIMA members like you.