Slow Food Seattle is pleased to announce they have 300 pounds of certified organic Makah Ozette seed potato available for purchase. (More info about this potato below.) Seed potatoes look like, well, potatoes! They are disease-free, genetic clones propagated from a mother plant in a certified seed lab. If you have limited outdoor space or are new to gardening, try growing a few seeds in a container. It’s low-risk, educational and very rewarding. Seed potatoes are available in 1-lb, 3-lb, 5-lb, 10-lb, and 25-lb packages. There are approximately 9-11 potatoes per pound. All proceeds from the sale will help fund the continued cultivation of the seed and seed donations to local Indigenous community gardens and food sovereignty programs. Slow Food is also asking for donations to keep the program growing and to give a little extra to seed farmer John Hogan, who has donated so much time and effort to the program, yet due to climate change has lost money on potato seed the past two years. Most farmers don’t usually replant potatoes after the fourth or fifth generation, which is why the work of certified seed labs and organic seed growers is so important. Please give as generously as you can. More info: Makah Ozette Seed Potatoes Available for Spring 2022 — Slow Food Seattle 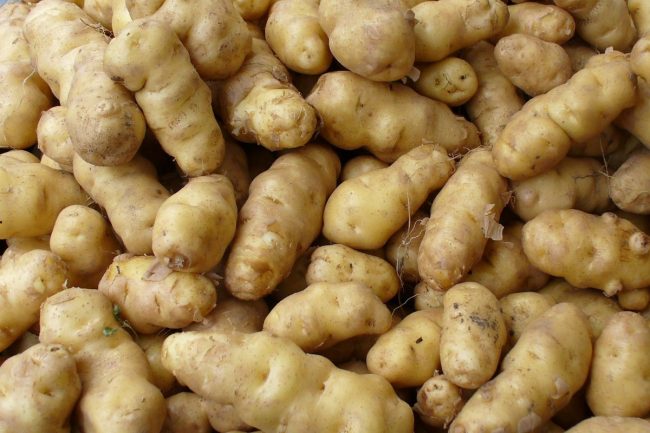 Fingerling potatoes at a Seattle farmers market photo by Carole Cancler (They look like Maka Ozette potatoes. Unfortunately, I didn’t record that detail with my original photo, so they might be another type of fingerling potato.)

About the Makah Ozette potato

A fingerling potato known to the Makah Nation as the Ozette potato has been a staple in the diet of these Pacific Coast Native American families for about 200 years. The Makah named this potato the Ozette after one of their five ancient villages (Waatch, Sooes, Deah, Ozette and Bahaada), located along the shore of the northwestern-most point of the continental United States, now known Cape Flattery. The Makah People or Qwiqwidicciat means “People of the Cape”. In 2004, phylogenetic analysis conducted at Washington State University shows evidence that the Makah Ozette potato was certain to have been imported directly from South America. How did this happen?

In the spring of 1791, the Spanish established a fort at Neah Bay, which they abandoned the following year due to the severe winter weather conditions that made it unsafe to moor their vessels in the bay. The fort contained a vegetable garden and there is evidence to suggest that potatoes they brought directly from South America or Mexico were planted there. It is believed that the Makah people either traded for or found abandoned the Ozette potato left in the garden of the fort. Because the Makah diet consisted mainly of seafood and marine mammals, they quickly adopted the potato as a rich carbohydrate source to cultivate in their vegetable gardens.

In the 1980s, the Ozette potato was catalogued, and the potato seed was first grown outside the Makah Nation. Another 30 years later, the Makah Ozette Potato Presidium by the Slow Food Foundation USA. Presidia are selected to improve the infrastructure of artisan food production and guarantee the future of local, traditional foods. Each Presidium seeks to identify endangered foods, establish production standards, and promote local consumption. The simple reasoning behind the Presidia—to assist groups of artisan producers—saves endangered food products from extinction.