In 2014, the Seattle City Council unanimously voted to change “Columbus Day” to Indigenous Peoples’ Day, celebrated the second Monday in October. Washington State recognizes the day after Thanksgiving as Native American Heritage Day and does not recognize Columbus Day.

Closed: All federal government offices. Post offices are closed and there is no mail delivery.

The name change from Columbus Day is intended to acknowledge that Native Americans were living in North America long before Christopher Columbus went looking for a westward route from Europe to the spice trade in China and India. To his surprise, there was this whole other land mass…. And, now we know the rest of the story.

As of 2019, 130 cities and eight states had legally changed the holiday, including Washington, D.C. Federally, it’s still known as Columbus Day.

Businesses closed on all national holidays

In addition to Federal holiday closure, these businesses usually close on early on Christmas Eve and New Year’s Eve.

Government offices are closed on all holidays, including city, county, and state offices, government buildings, court houses, and services such as licensing.

Post Offices are closed and there is no mail delivery. However, access to P.O. boxes is usually open. Private mailbox centers usually follow retail store hours.

Public libraries are closed on holidays. When holidays fall on a Sunday, they may observe a Monday closure.

Recreation centers at public parks including indoor swimming pools are closed on holidays.

Garbage and recycling pickup: For most customers in the Puget Sound region, there is no garbage pickup on New Year’s Day, Thanksgiving, and Christmas. However, garbage service is only delayed by one day. Therefore, if your regular pickup day falls on or after the holiday that week, adjust your pickup day to one day later. On all other holidays, garbage pickup is not adjusted.

Grocery stores are sometimes closed on New Year’s Day, >Thanksgiving, and Christmas, though closures may vary widely even among chain stores. If they are open, they may have adjusted hours, opening later or closing earlier.

Restaurants are sometimes closed on New Year’s Day, Thanksgiving, and Christmas, except those located in hotels. Restaurants open on holidays may have special menus or hours.

Grocery stores are open most holidays, except New Year’s Day, Thanksgiving, and Christmas, although availability varies widely. Note that hours at chain stores can vary by location and some stores have reduced hours.

Restaurants are open most holidays, except New Year’s Day, Thanksgiving, and Christmas. However, restaurants in hotels are often open on all holidays. Restaurants open on holidays may have special menus or hours.

Businesses open on all holidays

Movie theaters are usually open on all holidays. In fact, especially on Thanksgiving and Christmas Day, going out to a movie is a tradition for many.

Parks and outdoor facilities such as boat ramps are open on all holidays, usually dawn to dusk. This includes city, state, and national parks. However, indoor recreation centers are not open, including swimming pools.

Public transportation usually operates on either a Sunday or holiday schedule, especially commuter routes and services. A few operate on regular schedule and a few also have extended service, such as ferries and busses scheduled to handle extra demand on some three-day weekends or late night July 4th. 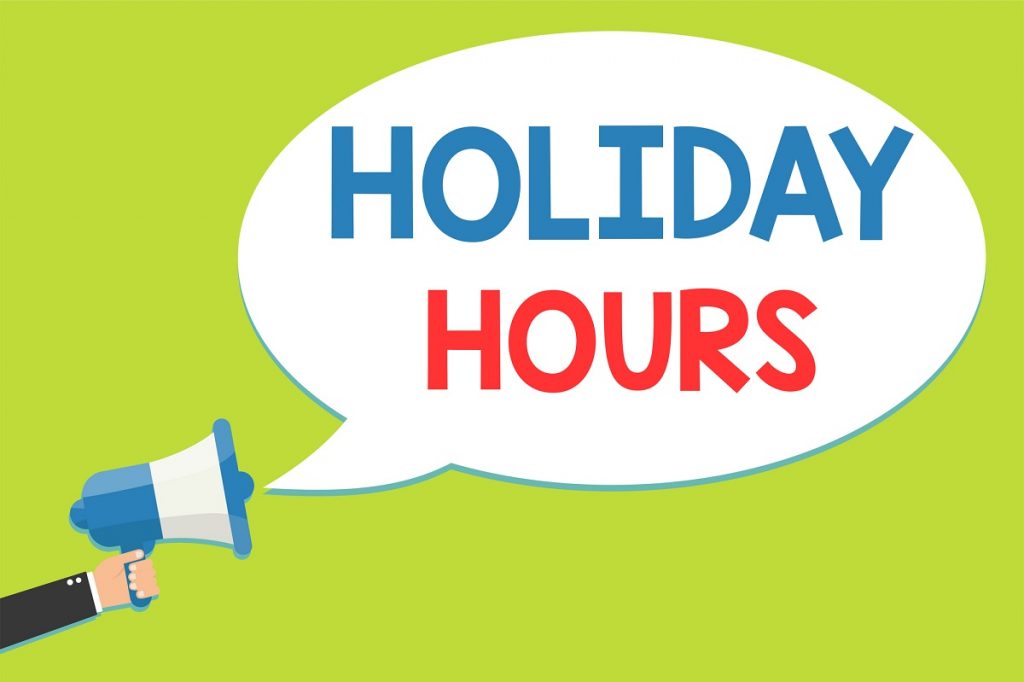