Chinook Book Seattle & Puget Sound is a different kind of discount coupon book. Chinook strives to feature companies, products, entertainment, and events that practice environmental and socially responsible business practices. They treat their employees and suppliers well, minimize their environmental impact, and support the community that supports them.

Chinook Book is available in a print edition and mobile app. Either one will help you save all year long on local and organic groceries, farm-to-table restaurants, experiences and adventures, sustainable home and garden solutions, handmade and upcycled gifts, wellness services and more.

The app features built-in geolocation to discover great businesses nearby and reminders to use favorite offers. 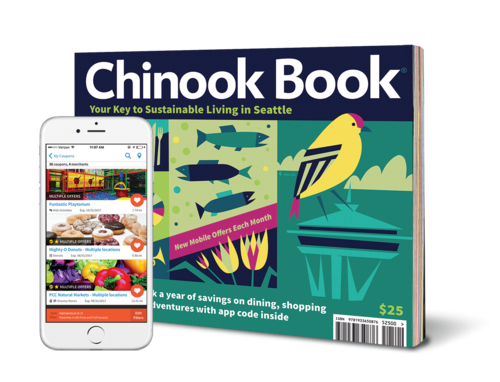 Founded in April 1999 in Portland, Oregon, Celilo Group Media is a media and technology company with a mission of expanding the marketplace for sustainable products and services. Since its founding, Celilo has distributed over 250 million green and local coupons, and worked with thousands of schools and community groups who raise funds for their organizations through the sale of Chinook Book.

The company is named after Celilo Falls on the Columbia River. “Celilo” can be loosely translated as “echo of rocks against water.” The Native Americans of the Pacific Northwest regarded the falls of Celilo as a sacred place. Trading communities flourished there, drawn by the bounty of fish the falls provided. Before the arrival of Lewis and Clark, Native Americans from as far south as California and as far North as Alaska would travel to Celilo to fish and trade.

On March 10, 1957, a dam at The Dalles, Oregon was completed, and within 24 hours the roar of Celilo falls was silenced under the rising water of the Columbia. But the falls are still there, under the water, and one day we may hear them again.

Their flagship product is the annual print and mobile Chinook Book, currently being published in Seattle, Portland & Oregon, San Francisco Bay area, Denver & Boulder, and Minneapolis & St. Paul. The publications are localized by staff in each of these geographic locations.

Where to buy the Chinook Book

The following map pinpoints places you can pick up a Chinook Book print copy from retailers around the Puget Sound region: