You are here: Home / Archives for air show 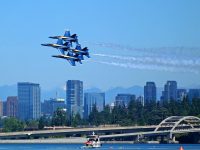 The Boeing Air Show during Seattle Seafair Weekend is a must see for all families and thrill seekers. For many across the Pacific Northwest, summer and Seafair reach their pinnacle as the pilots behind the yokes of the "Blue" Boeing F/A-18 Hornets make their thunderous and spectacular appearance over the … END_OF_DOCUMENT_TOKEN_TO_BE_REPLACED