Here’s a list of Japanese and Chinese gardens in the Puget Sound region. The Seattle Japanese Garden at the Washington Park Arboretum is the most well-known. However, there are at least 10 more you can visit, from Everett to Tacoma and Bellevue. Most offer FREE admission. They are arranged roughly north to south throughout the region.

The two best times of the year to visit any of these gardens is spring and fall. In spring, Asian gardens showcase blossoming trees and flowers. In fall, they are ablaze with color from maple trees preparing for a winter rest.

At other times of the year, there are often festivals and other events celebrating different aspects of Chinese or Japanese culture. If you are looking for beauty and serenity or wish to immerse yourself in the simplicity of Asian aesthetics (or want to learn more about it), then you will find it here. 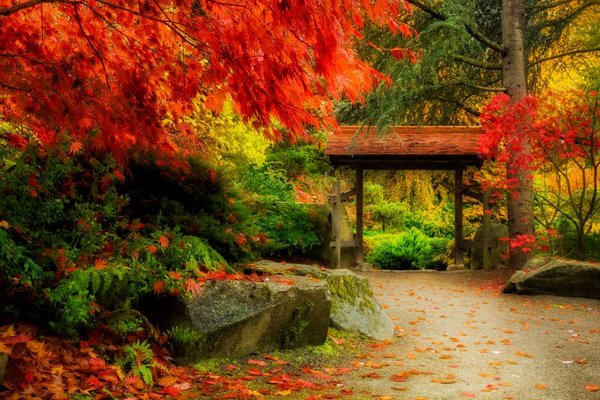 (These Japanese and Chinese gardens in the Puget Sound region are arranged roughly north to south throughout the region.)

Evergreen Arboretum & Gardens is located on 3½ acres in American Legion Memorial Park. The Arboretum contains 11 themed gardens, including the Maple Grove. These gardens are maintained by volunteers, with support from the City of Everett Parks Department.

Find the Maple Grove midway through the Arboretum, between the Woodland Garden and the Backyard Garden. It features over 700 Japanese Maple trees and offers seasonal displays, including spring foliage, fall color, and winter textural interest.

Monthly classes by local gardening experts are FREE for members and $10 for non-members. Individual membership begins at $25/year.

Bloedel Reserve began as the private home of environmentalist-cum-timber-heir Prentice Bloedel and his wife, Virginia. Today, the reserve is a public garden and forest reserve comprised of 150 acres and 23 distinct landscapes.

In 1956, the Bloedels hired Seattle’s Fujitaro Kubota to design a Japanese Garden on their recently acquired land, making it one of the first gardens on the property.

In 1961, a Guest House designed by Paul Hayden Kirk was added to the Japanese garden. The design combined elements of a traditional teahouse and a Pacific Northwest Native American longhouse.

The Seattle Japanese Garden is one of the most widely known Japanese gardens in the United States. The garden first opened in 1960 and was designed around a teahouse by Japanese master designers Kiyoshi Inoshita and Juki Iida.

The original teahouse was destroyed in a fire in 1973 but reconstructed several years later from the original plans, which were in Japanese. The new teahouse was named Shoseian, meaning ‘Arbor of the Murmuring Pines’.

The garden has two parts: a formal stroll-through garden (north) and an informal woodland (south). Some elements of the garden include gates, a pond or small lake, a wooden bridge, a meadow, a waterfall, a stone peninsula, and of course many beautiful trees and plantings.

Free tours are available with the price of admission and are offered several days a week. You can also take a self-guided tour. Simply wander along the garden’s pathways to stroll past koi-filled ponds and over bridges to enjoy the many design elements and serene nature of this urban retreat.

To enhance any visit, a variety of events, classes, and educational opportunities are available throughout the year. For a modest fee, guests can participate in an authentic Japanese Tea Ceremony–called Chado or The Way of Tea–in the Shoseian Tea House. This tea ceremony has been a cultural tradition in Japan since the 15th Century.

Watch this  introductory video to learn the spirit of Chado, “The Way of Tea”, presented by the Tankokai Seattle Association: 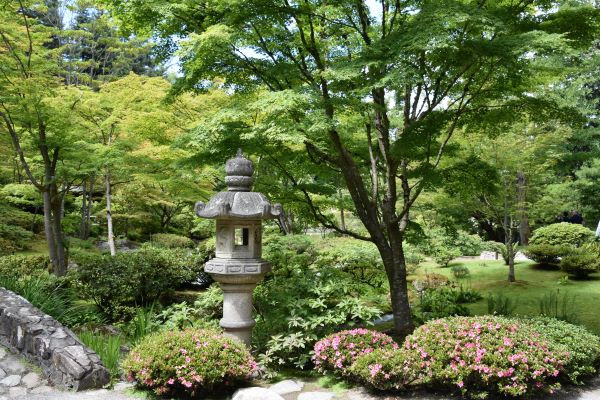 Part of the city’s park system, Bellevue Botanical Garden (BBG) sites on property that was gifted to the city in 1981 for use as a public park. BBG is comprised of many small gardens spread over 53 acres. Each garden has a specific focus.

You’ll find the Yao Garden situated near the south end of the parking lot. It was created to honor Bellevue’s sister city, Yao, Japan. The garden is a blend of Pacific Rim influences: maples and Columbia River basalt; native ground covers and Japanese lanterns; viburnums with azaleas and rhododendrons.

BBG annual events include a holiday light display, Mother’s Day event, and art exhibits, in addition to art and gardening classes on a variety of topics. Most events are FREE or low-cost.

The Seattle University Campus on Seattle’s First Hill boasts several gardens throughout their campus, designed and created by Fugitaro Kubota in the 1950s and 1960s.

Listed below are the Kubota garden locations on the Seattle U campus. A more detailed list, including the plants in each garden is available on the Seattle U website: https://www.seattleu.edu/media/grounds-and-landscaping/campus-gardens/Kubota-Gardens-on-the-Seattle-University-campus.pdf

(Listed in order from north to south and east to west)

About the Kubota Japanese Memorial Garden at Seattle U

Designed and installed by Allen Kubota, grandson of Fujitaro Kubota in 2004. Fujitaro, who funded, designed, and built the Kubota Garden in south Seattle, died in 1973 at the age of 94.

This special memorial garden honors the Japanese Americans incarcerated in camps during WWII, including Allen’s grandfather.

While incarcerated at Camp Minidoka, Fugitaro Kubota landscaped a garden at the entrance. Today, you can visit the Minidoka National Historic Site, managed by the National Park Service. 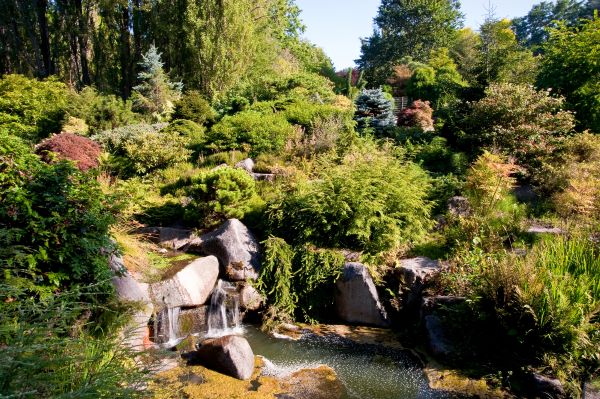 At the South Seattle College Arboretum, visitors are immersed in Chinese garden design elements of earth, water, stone, and agriculture. At 4.6 acres, it is one of the largest Chinese gardens outside of China. A hidden gem, the garden features stunning city and mountain views from its perch high above Seattle and Elliott Bay.

Depending on the season, your visit may include seasonal celebrations around peonies, bamboo, kites, tea, and other elements of Chinese culture. Some favorites include the Chinese New Year lantern festival, the Peony festival in spring, and summertime celebrations about kites. Many events are free or offered at a modest fee.

Classes at the garden are also available in different aspects of traditional Chinese culture, including horticulture, art, architecture, literature, and the culinary arts. A self-guided tour brochure is available here. 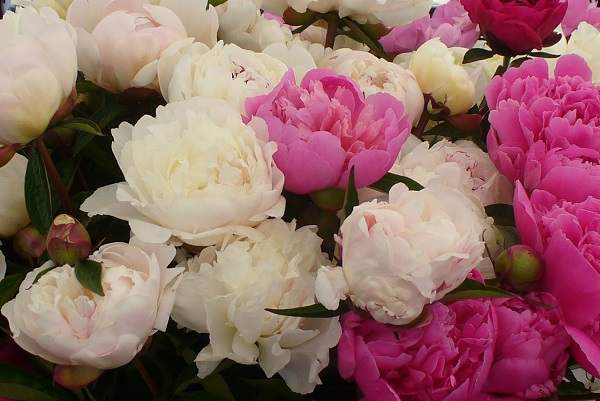 One cannot overstate the enduring legacy left by Fujitaro Kubota to the city of Seattle. He was an immigrant who single-handedly introduced Japanese garden design to the Pacific Northwest. Here he created a beautiful urban oasis that can be enjoyed by all.

Begun in 1927 at his home, the Kubota’s core garden was 4.5 acres. During World War II, he was evacuated with other Japanese-Americans to the harsh prison camp, Minidoka, situated along the Washington-Idaho border. Returning to Seattle, he labored once again to rebuild his landscaping business.

In addition, he continued to expand the garden’s size. Today, you can enjoy 20 acres of plantings and Japanese garden elements, including 140 varieties of maples, 30 hydrangea varieties, 9 ponds, and 2 bridges. It is one of the best gardens in the city to visit for fall foliage color.

Fujitaro died in 1973 at the age of 94. A few years later, rather than selling to condominium developers, his family sold the garden to the City of Seattle. The Seattle Historical Landmark is now managed by the Parks Department for public enjoyment.

FREE self-guided tour maps are available online and at the garden. Guided public and private groups tours are also available.

Public events are held in the gardens, many of which are FREE. Past events have included readings, tree walks, Kodo drummers, and history talks.

A Japanese immigrant, Shinichi Seike ran an import/export business in Seattle and lived in a farmhouse on 13 acres in Des Moines with his wife Kameno, daughter Ruth, and three sons Ben, Toll, and Hal. All three sons served in the U.S. military.

However, the family was imprisoned in America during World War II, along with more than 100,000 other Japanese-Americans. Fortunately, a German-American family maintained their property during their absence. Eventually, Shinichi Seike and his sons Hal and Ben opened a nursery, utilizing their horticulture degrees from Washington State University.

The Seike family built the Japanese Garden on their farm in 1961 as a memorial to their son and brother, Toll. Toll was killed in action in France while serving with the 442nd Regimental Combat Team, the most-decorated military unit in U.S. History. The family hired Shintaro Okada, a garden designer from Hiroshima, to assist with planning and construction of the classic pond-and-mountain Japanese garden design.

Impacted by the expansion of SeaTac Airport, the garden was moved to its present location in what is believed to be the largest relocation of a Japanese Garden in the United States. “The Seike Garden (DVD)“, tells the story of the Seike Japanese Garden is available through the King County Library System (Call number: DVD 712.509797 SEI).

Bonsai is an Asian art form and horticultural technique that originated in China as miniature landscapes. Eventually, the techniques were adopted by the Japanese to become what today are known as “bonsai trees”. The word “bonsai” means “planted in a container”.

The museum offers a rotating display of 60 bonsai in a majestic, yet serene outdoor setting among tower evergreens. Exhibits change with the seasons, from their collection of over 150 trees. It is one of the most diverse public collections in North America, featuring trees from China, Japan, Korea, and Taiwan, as well as the United States and Canada.

Festivals, classes, and other events are held throughout the year, including a beginner bonsai-keeping course. There is also a gift shop with online ordering. 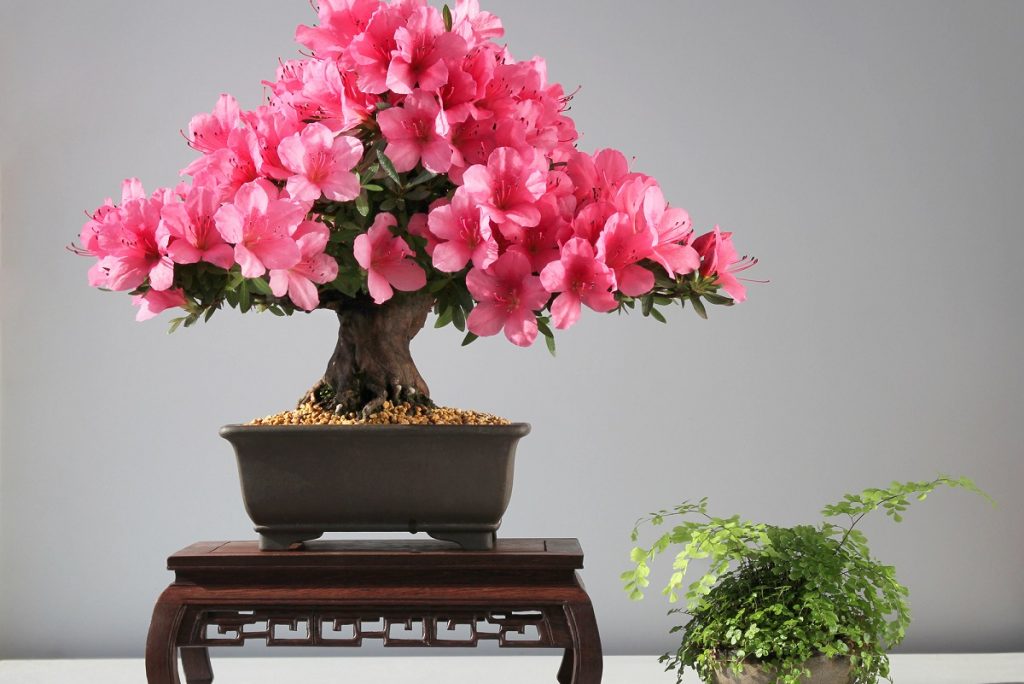 Plants in the Japanese Garden in Tacoma include azaleas, rhododendrons, flowering cherry trees, crabapples, and pine trees accented by other design elements including a footbridge, waterfall, lanterns, and pagoda. It is a very distinct and peaceful area for you to enjoy a bit of solitude. Events are held in the pagoda from time to time.

The backbone of Lakewold’s plant collection is its collection of 800 Rhododendrons.

The gardens also offer 30 Japanese maples to view, in particular, the Acer ‘Shindeshojo’—at its peak in spring. But its beauty is fleeting; if you miss it, you’ll need to return another year. Or, content yourself with 29 other trees. Lakewold also boasts two champion trees in the Washington State Big Tree Program. Designated trees are the largest known examples of their kind, representing the maximum growth of a species:

A variety of events are hosted year-round including guided walking mediation, gardening classes, and more. Animal lovers can enjoy “Dog Days” once a month when dogs are welcomed into the gardens for $5 per dog. Don’t miss a visit to their gift shop.

The following free and cheap garden events are listed on our calendar in the next several weeks.