You are here: Home / Arts & Entertainment / How to get discount tickets to 5th Avenue Theater
← Fremont Fair and Solstice Parade
Car-free Bicycle weekends in southeast Seattle →

Built in 1926 as a home in Seattle for Vaudeville tours, the theater is ornately modeled on the Forbidden City in China, as well as the Emperor’s Summer Palace and the Temple of Heavenly Peace. To this day, it is widely considered to be one of the most beautiful theaters in our country. However, it’s important to know that the Chinese architecture was designed by two white Europeans at a time when it was illegal for Chinese immigrants to enter the United States. In addition, there was significant anti-Chinese sentiment at the time, with violent riots taking place in Seattle, Tacoma, and what is now Issaquah. While today we can appreciate the detail of the architecture, it is also important to remember this history in order to better honor the present.

Despite a storied existence as both a Vaudeville stop and later the city’s most popular movie palace, the combination of the recession in the ‘70s and the rise in popularity of both television and the Cineplex proved a fatal mix for The 5th. In the late 1970s the theater shuttered its doors and fell into disrepair. For a time the fate of the theater was uncertain. There was some discussion of whether or not the theater should be torn down, and even discussion of converting it to a Chinese restaurant. 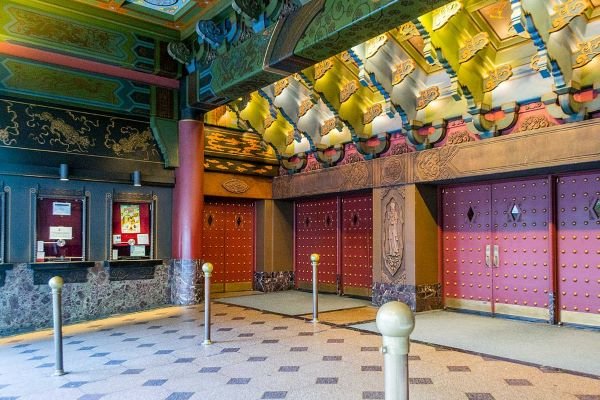 Musical theater joy is at the heart of everything at the 5th Avenue Theater. The 2022/23 season includes delightful, surprising, and moving musicals that taken together investigate the complicated, often messy, but always sublimely beautiful, truths of living. Season ticket subscriptions are available now. Individual performance tickets, if available, go on sale 8-12 weeks before opening night for each performance.

Full Season Subscribers see six musicals at the lowest individual ticket prices, plus enjoy FREE PARKING and discount FRIENDS TICKETS. Full and Partial season subscribers get to choose the best seats in the house at the best price plus get fee-free ticket exchanges and access to a variety of other discounts (merchandise, restaurants, etc.).

Group tickets of 10 or more to an individual performance save up to 25% on ticket prices, plus save on ticket fees. Groups also get early access to the best seats in the house, before they go on sale to the general public. Group tickets the current season go on sale in summer. More info: Group Sales \ 5th Avenue Theatre

Day-of-show discount tickets may be available for select performances to the following patrons. Day-of-show tickets must be purchased in person when the Box Office opens each day.

Volunteering for The 5th Avenue Theatre is a great way to earn tickets to select performances. A variety of volunteer tasks are available. Orientation sessions for new volunteers takes place once or twice a year. Start by getting on their waitlist. More info: Volunteer \ 5th Avenue Theatre

Listed below are upcoming live or virtual arts performances at these historic theatres as well as other performance venues in the Puget Sound region.