You are here: Home / Our guides / Holiday Guide / Where to see Space Needle NYE Fireworks
← New Year’s Day Polar Bear Dips and First Day Hikes
Everything you need to know about bike riding →

Join more than 50,000 people ringing in the New Year at the base of the world-famous Seattle Space Needle, located on the grounds of Seattle Center, just off Broad Street between 4th and 5th Avenues. The big public fireworks display boasts more than 2,000 pyrotechnic effects, one of the biggest and most spectacular displays anywhere in the United States. When the clock strikes midnight, the fireworks shoot up the landmark tower, seeming to burst out the top 600-feet above the city. Note: Parties on the Observation Deck and SkyCity Restaurant sell out months in advance. If you want to go next year, save your pennies–lots and lots of them–and plan to book before Halloween.

The midnight fireworks at the Needle dominate the Seattle skies and can be seen for miles around. Here’s a sample of some of the best outdoors viewing points, where you can see the fireworks for free (or cheap). Most are well-known locations and can be very crowded. So, plan to park to get there early and park a few blocks away if you want to avoid sitting in traffic when you head home.

Note: NYE December 31, 2019 fireworks may be cancelled due to predicted gusty winds of 45PMPH. The decision will be made just before midnight. But the laser light show will go on either way. The National Weather Service issued a high-wind advisory for the Seattle area that is in effect from 10am December 31, 2019 through 4 AM January 1, 2020. More weather info at the National Weather Service. 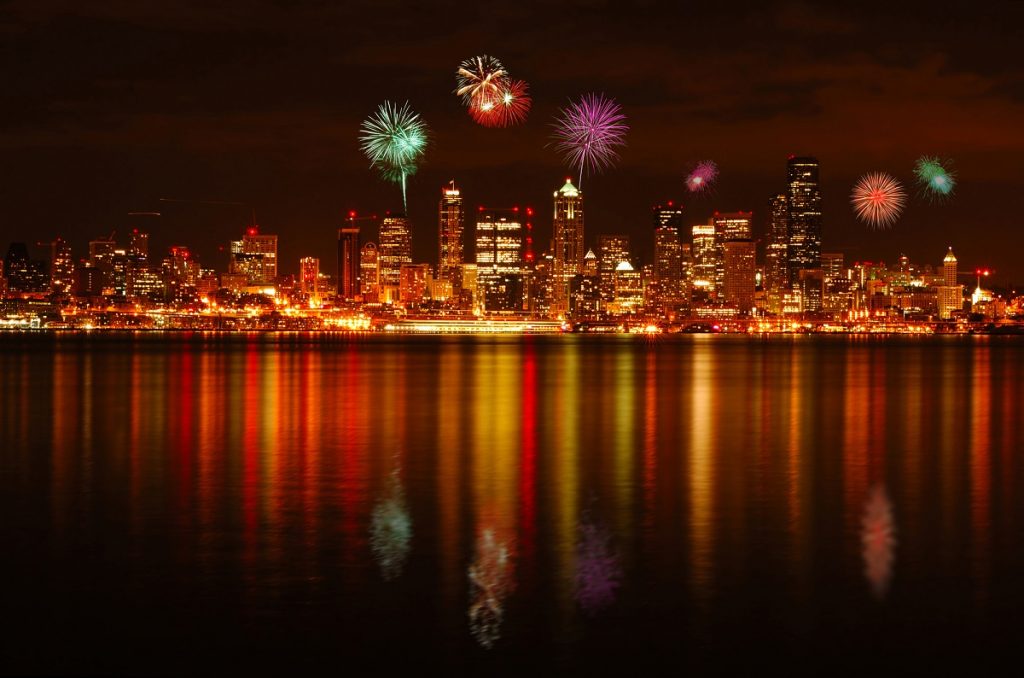