The Grand Coulee* soars 350 feet above the downstream river and stretches just shy of one-mile across the river. The dam is 500 feet thick at its base and 30 feet thick at the top. The dam contains nearly 12 million cubic yards (9.2M cubic meters) of concrete, three times as much as Hoover Dam, which is taller by 176 feet, but less than 1300 feet across. Coulee contains enough concrete to build a sidewalk 8 feet wide and four inches thick that circulates around the equator (50,000 miles), or a highway from Seattle, Washington to Miami, Florida.

*Coulee comes from the French word couler, meaning “to flow”. The word can be used in everday speech to refer to a small stream, shallow ravine, or gully.

Grand Coulee Dam was designed as an irrigation project in the 1920s and financed as a jobs program in the 1930s. At the time, the general population viewed dams as good and a useful legacy for now and future generations. Completed in 1941 after eight years of construction, during which 77 lives were lost, Grand Coulee became the nation’s primary powerhouse in response to demands for electricity to support the World War II effort. After the war, it continued to provide much of the power for the Northwest’s continued industrial and urban growth.

To illustrate the thinking of the time, in 1941, Woody Guthrie traveled around the Columbia Basin and wrote a collection of 17 songs, released as “The Columbia River Collection”. Some of the best known are “Roll on Columbia”, “Grand Coulee Dam”, “Hard Travelin’,” and “Pastures of Plenty.” “Roll On Columbia, Roll On,” sung to the tune of “Goodnight Irene” and later adopted as the state folksong of Washington includes the line, “Roll along, Columbia, you can ramble to the sea, but river, while you’re rambling, you can do some work for me.” On the following YouTube video, you can listen to Woody singing the tune:

But construction of Grand Coulee was not without controversy:

Today’s thinking has changed. Many dams are old, obsolete, and now considered environmentally unsound, rather than technologically forward (times change, huh.). Besides being expensive to repair, dams are being considered for removal to restore rivers to their original function, such as the Elwha River Dam.

The 100-year old Elwha River Dam on the Olympic Peninsula became the world’s largest dam removal project, begun in 2011 and completed in 2014. Today, the Elwha River is one of the largest ecosystem restoration projects in the history of the National Park Service.

What to see and do in the Grand Coulee Dam area

Whether a stopover or a destination, many find the Grand Coulee Dam to be an interesting and worthwhile stop.

The Visitor Center (Wa-155, Grand Coulee, WA 99133) is open daily (except Thanksgiving Day, Christmas, and New Year’s Day). The center features hands-on exhibits exploring the construction, impact, and management of the dam, plus related topics such as irrigation, flood control, and hydroelectricity. You can also take a short, free tour, providing a limited behind-the-scenes look at some of the dams inner workings.

The Colville Tribal Museum & Gift Shop (512 Mead Way, Coulee Dam, WA 99116) is across the Columbia River from the Visitor Center over the Grand Coulee Bridge.  The museum’s cultural exhibits feature Colville Confederated Tribes, which include: Nez Percé, Okanogan, Methow, Wenatchi, Moses/Columbia, Nespelem, and Colville peoples. The exhibits include woven baskets, beaded buckskin clothing, historic photos, arrowheads, Lewis and Clark Expedition artifacts, and Matthew’s Gospel translated into Nez Percé. The tribal gift shop sells contemporary native arts and crafts. From the museum, you might enjoy a walk back across the historic Grand Coulee Bridge. There is a good view of the dam over the Columbia River and placards along the railings of the bridge walkway provide interesting details about the dam and geology of the area.

Other nearby stops are Crown Point State Park, about six miles west of the Visitor Center and Dry Falls, 35 miles south of Coulee Dam (and just south of US-2) on SR-155.

If you have time for a longer road trip, consider the Coulee Corridor National Scenic Byway between Omak and Othello along SR 17, SR 155 and US 2. The Coulee Corridor sights include deep gouges, gigantic gravel bars, and the effects of glaciation in central Eastern Washington. For more information and maps, also visit the U.S. Department of Transportation Federal Highway Commission Coulee Scenic Byway page.

Grand Coulee Dam’s laser light show is held nightly in summer, from Memorial Day Weekend through September. Projected onto the spillway, the free show lasts about 30 minutes. One of the best viewing locations is below the Visitors Arrival Center, from the park at the base of the dam. Bring a blanket. An outdoor sound system is provided.

Here are other recommended viewing spots for the laser light show. Bring a portable FM Radio to listen to the simulcast on 90.1 FM.

The Grand Coulee Dam generating plant tour begins with a bus ride to the Pump-Generating Plant. Highlights of the tour include a look at the large pumps used for transporting water from Lake Roosevelt to the Columbia Basin Project, concluding with a ride across the top of the dam. Accessible tours are available with advanced notice by calling (509) 633-9265. All tour participants are required to pass through a metal detector prior to beginning the tour. Weapons, purses, bags, backpacks, fanny packs, and packages are not permitted on the tour. Cameras, but not camera cases, are allowed on the tour. Onsite storage for personal belongings is not available. Be sure to lock your car. Tour times are subject to change without notice. Please call the Grand Coulee Dam Visitor Center at (509) 633-9265 for the latest information. Tours are offered daily from April-October.

For more information about the laser light show or tours, visit: https://www.usbr.gov/pn/grandcoulee/visit/ 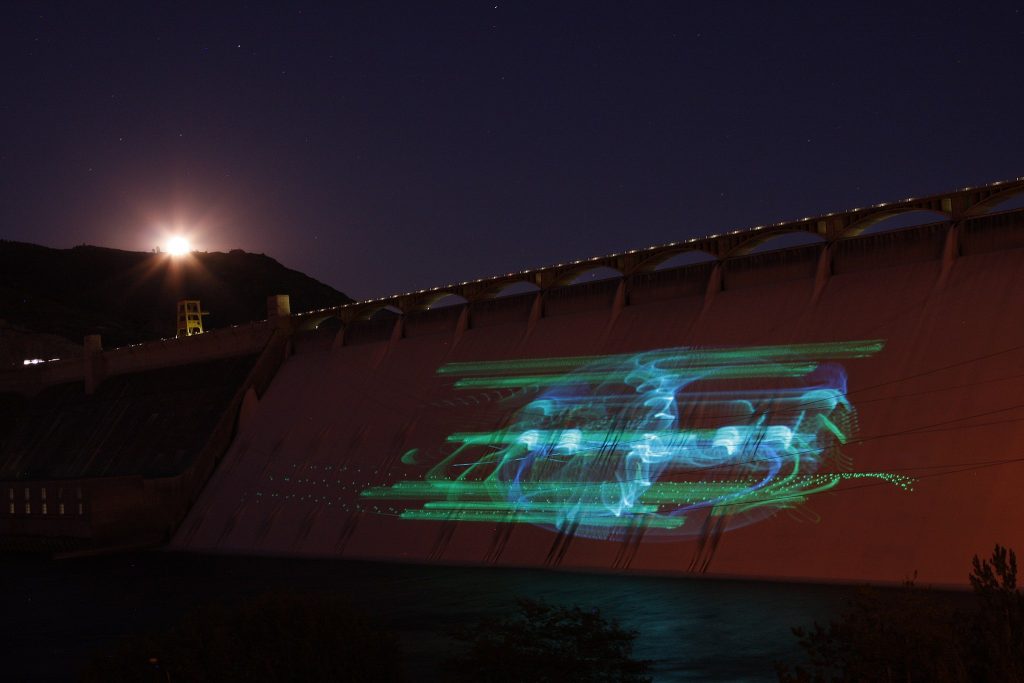