You are here: Home / Events & Things to do / Tours & Attractions / 11 Puget Sound lighthouses you can visit for free
← Free food safety apps and guides
June events and entertainment →

The following list includes 11 lighthouses you can visit in the Puget Sound region. They are arranged north to south. Find a Google Map with each of these lighthouses pinpointed at the end of the list.

All lighthouses are free to visit, though most will gladly accept donations. Lighthouses inside Washington State Parks require a Discover Pass ($10/day, $30/annual). A couple sites have other small fees under $10 per visit. We’ve listed the best days to go, usually when tours are offered or other facilities are open, including the lighthouses, museums, or gift shops. Either way, most lighthouse grounds are open year-round, except where stated otherwise.

Most of the lighthouses are historic sites with non-functioning lights. However, several are operating to aid maritime traffic in navigation of Puget Sound waterways.

Several of the lighthouses are in Seattle or a short drive away. Others would make more of a day trip with a picnic in fair weather. Find a Google map showing the location of each lighthouse at the end of the list.

New Dungeness Lighthouse, Sequim, WA 98382. (About 75 miles northwest of Seattle via Seattle Bainbridge Ferry) Located northwest of Sequim inside the Dungeness Wildlife Refuge at the end of a long sandspit, a strenuous 2-hour, 6-mile walk (many trekkers give up, but 34,000+ have visited since 1994). Boaters must contact the Refuge office at 360-457-8451 before landing. The refuge is haven to dozens of species of birds, land mammals, and marine mammals. Listed on the National Register of Historic Places. The lighthouse keeper program is an opportunity to stay at the lighthouse for a week (though it’s not free or even cheap; reservations can be made one year in advance).

Point Wilson Lighthouse in Fort Worden State Park, 200 Battery Way, Port Townsend, WA 98368. (About 60 miles northwest of Seattle via Seaatle-Bainbridge Ferry.) Functioning, fully automated lighthouse located within a 432-acre park with more than 2 miles of saltwater shoreline and a wide variety of services and facilities, including a full-service conference center and the Coast Artillery Museum with special emphasis on the harbor defenses of Puget Sound as they existed and functioned from the late 1800s to the end of World War II. Requires Washington State Discover Pass.

Mukilteo Lighthouse, 609 Front St, Mukilteo, WA 98275. (About 30 miles north of Seattle.) Functioning lighthouse with a range of 12 miles maintained by the USCG and a local non-profit.

Point No Point Lighthouse, 9009 Point No Point Rd NE, Hansville, WA 98340. (About 35 miles northwest of Seattle via Bainbridge Ferry.) Functioning, fully automated lighthouse and oldest of the Puget Sound lighthouses (operating since 1879). Located in a 3-acre park on the northern tip of Kitsap Peninsula. Named in 1841 by Charles Wilkes of the U.S. Exploring Expedition when he found the point much smaller than expected. Listed in the National Register of Historical Places.

West Point Lighthouse in Discovery Park, 3801 Discovery Park Blvd, Seattle, WA 98199. Functioning, fully automated lighthouse at the base of Magnolia Bluff marks a hazardous shoal at the northern entrance to Elliott Bay. The beacon’s signal flashes every five seconds, alternating red and white. The white light is visible for 19 miles, the red for 16. Stop at the Discovery Park Visitor Center for information about trails to the beach and lighthouse; a shuttle is available on weekends. Parking at the lighthouse is only allowed by permit for families with children under 8, people over 62, and persons with disability that prevent them from walking 2 miles down (and back up).

Point Robinson Lighthouse in Point Robinson Park, 3705 SW Pt Robinson Rd, Vashon, WA 98070. (About 25 miles southwest of Seattle via Vashon Ferry.) Functioning, fully automated lighthouse located on the eastern side of Maury Island (connected to Vashon) in a conservancy park with a sandy beach, natural areas, trails, and picnic area. Side trip: Bicycle embedded in a tree is off Vashon Highway and SW 204 Street, at the northeast corner, about 50-60 ft into the woods on the north side of Sound Food Cafe.

Dofflemyer Point Lighthouse, Lighthouse Ln NE, Olympia, WA 98506. (About 65 miles southwest of Seattle.) Listed on the National Register of Historic Places. Functioning, fully-automated lighthouse at the eastern entrance to Budd Inlet. It is the southernmost and historically the only unmanned lighthouse in Puget Sound, maintained by a contract keeper who visited the lighthouse once a week, from 1887-1987 until the lighthouse was finally automated Since it is llocated on a private beach in Boston Harbor, the lighthouse and grounds are not open to the public. However, you can see and photograph the lighthouse from the Boston Harbor Marina docks or Jeal Point to the north. 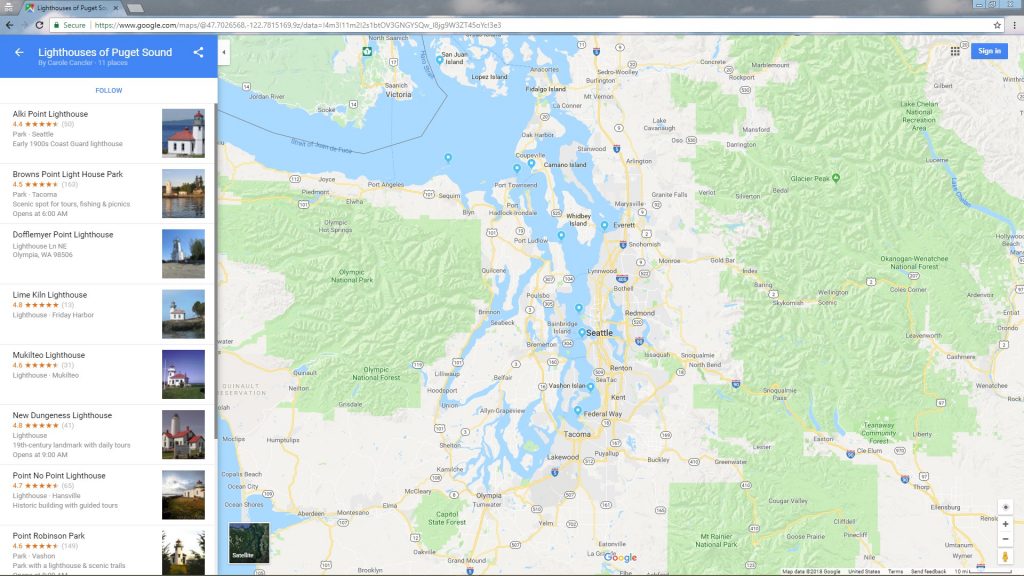