Seattle made aviation history in 1916 when William E. Boeing and Navy Lt. Conrad Westervelt formed the Boeing Airplane company and hired self-taught aviation tinker Herb Munter to build the company’s first aircraft, the B&W seaplane. Read more about Boeing and Early Aviation in Seattle at historylink.org, and the feature stories that follow to chronicle Seattle’s love affair with aircraft and aviation. The love affair continues to this day. Listed below are some of the major air shows and related events of special interest to aviation aficionados in every corner of the Puget Sound region. 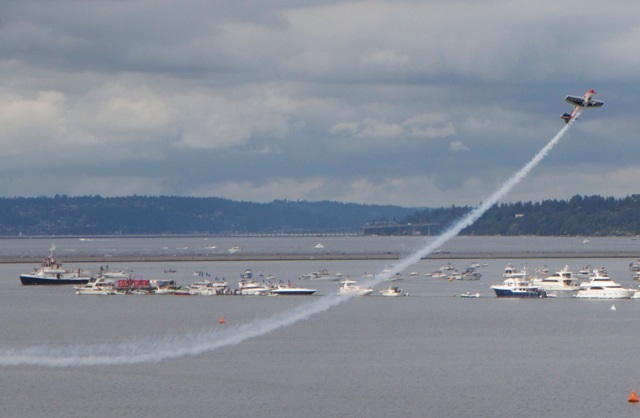 (Listed in date order throughout the year)

Skyfest 2022 at Fairchild AFB in Spokane. Team Fairchild opens its gates to the public for a free event to showcase Pacific Northwest’s airpower. When: May or June.

Olympic Air Show features four hours of aerobatic performances by many renowned air show performers in a variety of noted historical aircraft. Free parking at the Olympia Regional Airport fills very quickly, then use street parking in the surrounding areas of the airport– likely some distance from the entrance. When: Father’s Day Weekend.

Felts Field Neighbor Day. Organized by Historic Flight Foundation, the Experimental Aircraft Association, and the Washington Pilots Association. This event will showcase many of the aircraft that in recent years have graced the tarmac of Vintage Aircraft Weekend. The event also will draw on the considerable inventory of vintage aircraft based in and around Felts Field. A “fly-out” Saturday afternoon will feature spot landing and flour bombing at Deer Park Airport. The public will be invited to tour the flight line and meet the pilots. Rides will be offered in several aircraft. Admission will be by donation. T-shirts and aviation retail will be offered. When: June.

Seafair signature events includes one of the most impressive air shows in the country, in no small part due to the performance of the U.S. Navy Blue Angels. The Seafair air show also includes acrobatic thrills and other military, vintage, and specialty aircraft along with festival action on the ground all weekend. When: 1st Sunday in August. For ways to save on tickets, read our post on discount tickets for Seafair Weekend. Also check our list of locations where you can watch the Blue Angels for free.

Bellingham Airfest has not been held since 2019. More info: Events Calendar Bellingham | Whatcom County and https://www.portofbellingham.com/

Paine Field Aviation Day was cancelled in 201 and has not re-surfaced. The Flying Heritage & Combat Armor Museum (FHCAM) is closed. Tthe Historic Flight Foundation (HFF) relocated from Everett to Spokane.

The following events on our calendar include air shows and other aviation events around the Puget Sound region.