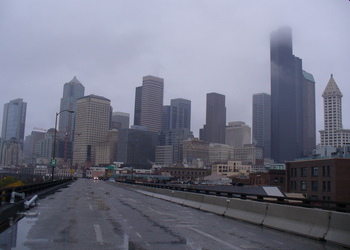 History of the Alaskan Way viaduct

In the 1950s, the Alaskan Way Viaduct was built along Seattle’s downtown waterfront. Ray Finke, city engineer at the time the viaduct was built, sums up one opinion about the roadway, “It is not beautiful,” Finke said, as designs for the viaduct neared completion.

By the end of the 20th century, the two-mile-long structure was among the state’s busiest and most important sections of highway, carrying 110,000 cars each day.

In February 2001, a 6.8 magnitude earthquake struck Seattle and sections of the viaduct sunk several inches. Engineers agreed that the viaduct could collapse with a longer or stronger quake. While state and local agencies studied alternatives for a decade, tunneling technology advanced presenting an alternative that had previously been considered too expensive: boring a tunnel under Seattle. SR 99 would remain open during construction, maintaining a vital stretch of highway through the city.

In February 2011, crews demolished a portion of the on-ramp connecting SR 99 to First Avenue South, marking the first time any part of the viaduct had been torn down.

After that initial demolition, during a nine-day closure in October 2011, an army of machines moved in to demolish the viaduct’s south end.

As of February 2017, the project is scheduled for completion in 2019-2020. On the WSDOT website you can learn more about the Alaskan Way Viaduct Project and scheduling updates.