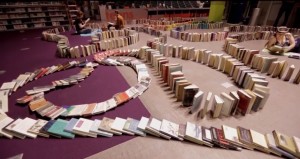 Seattle Public Library (SPL) launched their 2013 summer reading program by breaking the world record for the longest book domino chain. The previous record of a 1,000-book domino chain was set by an organization called Responsible Fishing in the United Kingdom in 2011.

For the record-breaking event, Amy Twito, SPL youth programs manager worked in collaboration with two local residents: Luke Greenway of Bryant/View Ridge (then a senior at Middlebury College ) and Laura D’Asaro of Sand Point’s Matthews Beach neighborhood (a Nathan Hale High and Harvard University graduate). It took five tries…just in time for the midnight deadline. If the fifth attempt had not been successful, there wouldn’t have been enough time to try again. The domino chain was set up after the library closed.

Watch the book domino chain fall in the YouTube video below. Twito’s team and 27 volunteers (and 112 slices of pizza) created a domino chain from 2,131 books. (The pizza went into the volunteers, not between the books). This is a must-see video.

Seattle Public Library mission is to enable all individuals in the community to exercise their right to access constitutionally protected information and to support every patron in becoming a lifelong reader. In 1998 Seattle voters said “yes” to the largest and most comprehensive library initiative in our country’s history, launching a $290.7 million project to rebuild and renew The Seattle Public Library system. Ten years later, Libraries for All was finished, with four new libraries in communities previously without library service, the renovation of 22 existing branches, and a spectacular new Central Library.