You are here: Home / Seasonal / Rainy day fun / Free online encyclopedia of Washington state
← Month-by-month free and cheap things to do
10 cheapest places to buy gas in Seattle and Tacoma →

HistoryLink.org is the first and largest free, online encyclopedia of community history created expressly for the Internet. It written by Washingtonians, about Washington State. The content increases almost daily. New features fill gaps and enlarge upon selected subjects. Existing articles are often expanded or corrected to reflect new information. HistoryLink.org is a work in progress, an ever-evolving online archive of Washington state and local history.

With a few noted exceptions, all essays and features on the site are original works prepared exclusively for HistoryLink.org by staff historians, contract writers, volunteers, and consulting experts. All essays and features are vetted by professional staff, guided by a distinguished board of scholars, educators, and community leaders.

The encyclopedia is a free, authoritative, and easily accessible Washington State history reference for the benefit of students, teachers, journalists, scholars, researchers, and the general public. HistoryLink.org serves an average of 4,000 visitors a day.

The encyclopedia is organized into three libraries:

HistoryLink Fair Use and Copyright Policies

Especially note that the Creative Commons license applies to text only, and not to images. The copyrights for most images on HistoryLink.org are owned not by HistoryLink but by the individuals, institutions, and archives sourced in the image captions. HistoryLink.org does not maintain an archive of imagery for public use or reproduction. For more information regarding individual photos or images, please contact the sources noted in the captions.

Except for most People’s History articles, HistoryLink.org articles are fully sourced, bylined, and dated to provide authoritative references for legal, journalistic, and scholastic use. Different stylebooks have different citation styles. For most purposes, we recommend using the following format to cite HistoryLink.org: Formal name of the encyclopedia, “Name of the essay” (author’s name), link to encyclopedia (date accessed). 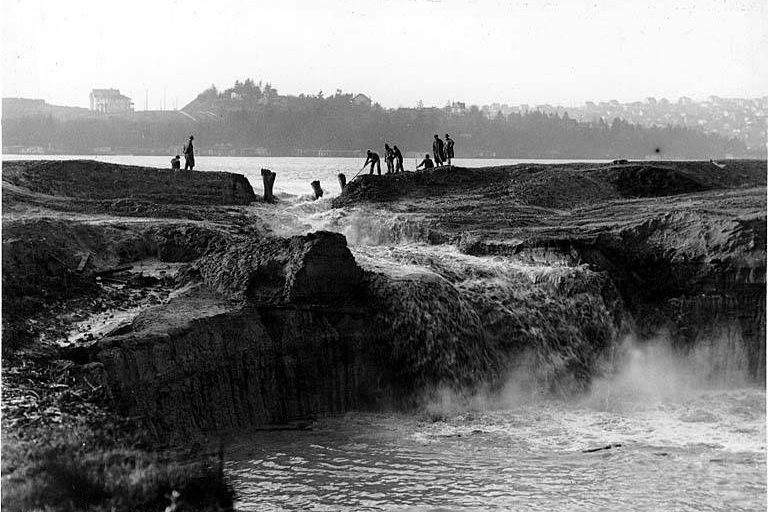 Cutting away the cofferdam at the Montlake Cut between Lake Washington and Lake Union. December 1913. Photographer unknown. (Public domain)