In the Puget Sound region, the Great Blue Heron (Ardea herodias) represents the natural heritage, interconnectedness, and ecological richness of the greater Salish Sea (which includes Puget Sound and the Straits of Georgia and Juan de Fuca).

The abundance of both saltwater and freshwater, over 4,000 miles of shoreline, and temperate climate creates an ecologically rich system where the large wading bird can flourish. In fact, the Puget Sound region is the area of greatest concentration of Great Blue Herons on the West Coast, attracting some of the largest populations in North America.

Our heron population is part of an intricate ecosystem that includes the marine coastlines and intertidal regions, wetlands, and forests, which they use for food, nesting, and breeding. 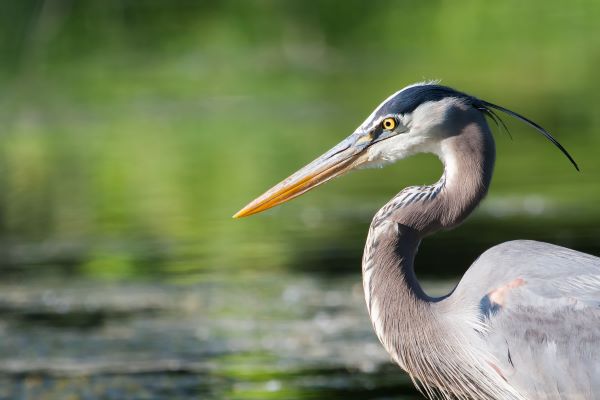 About the Great Blue Heron

The Great Blue Heron is the largest heron in North America. The North American heron population consists of five recognized subspecies, including the most common form, A. herodias herodias, which extends into western Washington state.

The large bird has a slate-gray body, chestnut and black accents, and verrry long legs and neck. Young birds are less colorful. Adults sport a shaggy ruff at the base of their necks, young birds have streaked necks. Adult herons stand three to four feet tall. In flight, they look enormous with a wingspan of six feet.

The bird is common near the shores of open water and in wetlands over most of North America from the Atlantic and Gulf coasts to the Pacific, as well as Central America, and the Caribbean and the Galápagos Islands. The Pacific coast heron population ranges from Alaska’s Prince William Sound in the north, to South America and the Galapagos Islands.  In the Pacific Northwest, there is a population of a non-migratory subspecies of Great Blue Heron that is described as a separate subspecies, A.h. fannini.

Great Blue Herons are vulnerable to a number of environmental impacts and changes within the Puget Sound Basin, including habitat loss due to urban development, pollution (including noise disturbance), depredation by bald eagles, and other environmental factors, including climate change. The species is under constant threat and at risk of decline. Please exercise caution when birdwatching.

Nesting areas with a group of heron nests are referred to as rookeries, heronries, breeding colonies, or nesting colonies. 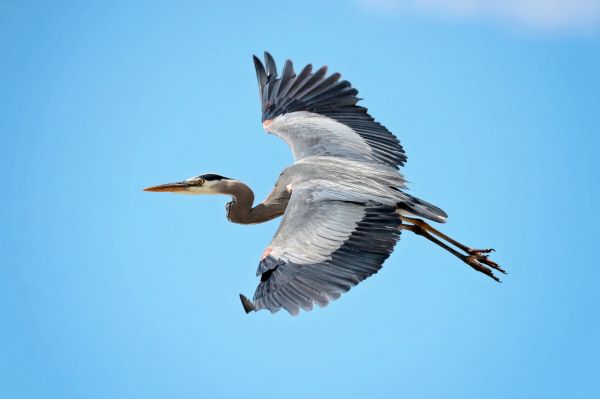 Heron nests are typically built high up in trees and are mainly constructed of sticks. Herons may return to the same nest each year, adding new sticks as needed. However, herons bond only for the current nesting season. Adults will find a new partner each year for breeding.

From January to March, there is a large influx of adult herons to heronries or nesting colonies to prepare for breeding season. Colonies in the South Sound breed earlier (January-February) and in smaller concentrations than those of the North Sound and the southern Strait of Georgia (February-March), where there are larger concentrations.

July to September is the conclusion of the breeding period, when fledglings and adults leave the colony and head back to the feeding grounds. October to December is a non-breeding period, when herons are foraging or roosting alone or in small groups throughout the Puget Sound region, typically near sea level and lower elevations. 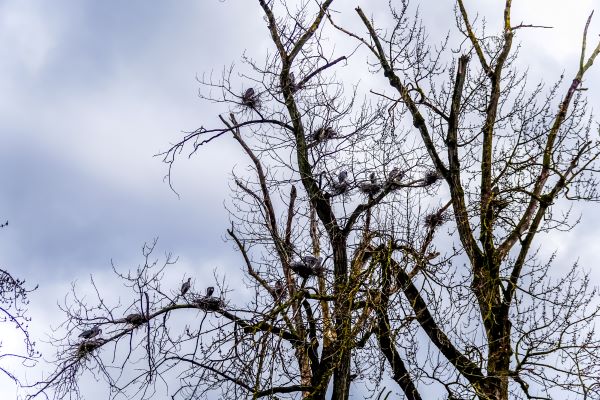 Great Blue Herons are protected under state and federal law, and by the City of Seattle. When observing the rookery, please keep in mind the 1000-foot disturbance buffer zone.

March is one of the best months to visit breeding heron colonies in Seattle and surrounding areas. Keep in mind that while birds typically return to the same nesting area each year, colonies can also move from locations for various reasons, such as predation from eagles.

Seattle is home to many heron colonies, including the North Beach neighborhood (between Carkeek Park and Golden Gardens), Matthews Beach, the University of Washington campus, Commodore Park on north Magnolia Hill, and the West Marginal Way Greenbelt. Seattle’s largest colony is located in Commodore Park on the north side of Magnolia Hill along Salmon Bay. More info: https://www.greenseattle.org/herons-commodore-park/

Renton’s Black River Riparian Forest and Wetland is home to more than 50 species of birds, including one of the largest great blue heron colonies in the region. More info: https://www.rentonwa.gov/city_hall/community_services/parks_and_trails/find_a_park_or_trail/black_river_riparian_forest

In King County, heron colonies are found in City of Kenmore, Marymoor Park in Redmond, the Black River Riparian Forest and Wetland in Renton, and at Lake Sammamish State Park.

In Pierce County, heron colonies are found at the Dumas Bay Sanctuary in Tacoma.

In Skagit County, heron colonies are found on Samish Island between Samish Bay and Padilla Bay, and the mouth of the Skagit River valley.

In Snohomish County, Smith Island and Spencer Island. The Snohomish River Estuary has been under restoration, so information and access is spotty. More info: Snohomish Estuary Project Prioritization | Washington Department of Fish & Wildlife

Outside of the Puget Sound region, there are also heron colonies on Vancouver Lake in Clark County and in Grant County at Potholes Wilderness Recreation Area.

(If nothing is listed below, there are no bird-related events in our calendar. Theoretically, this shouldn’t happen. We always try to have some birding events on the calendar. Most bird-related activities occur in spring and fall.)